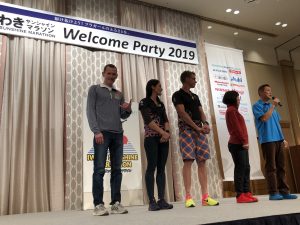 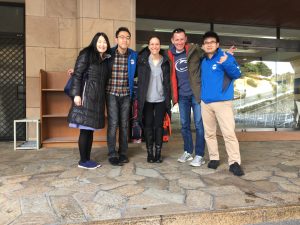 My wife and I traveled to the beautiful island of Kauai in August of 2018 for my best friend’s wedding. The trip coincided with The Kauai Marathon and Half Marathon so I decided to run the marathon before flying home. I finished in 2nd place, so you can imagine my surprise a few weeks later when I was told that I had won a trip to Iwaki City, Japan as part of their sister city agreement.  After discussing with my wife, we decided it was too good of an opportunity to pass up. Fortunately, we were able to line up our parents to babysit the kids for our trip.

Our trip to Japan was amazing. From the moment that we were greeted at the airport until our departure on Sunday for Tokyo, our guides Kazu, Shu and Akari were incredibly welcoming and fantastic hosts. We were fortunate to have a direct flight from Washington, D.C. to Tokyo. After our 14-hour flight we arrived on Thursday evening and enjoyed a traditional Japanese dinner with Kazu and Shu, along with two other runners from Townsville, Australia (Sonja and Tony). On Friday, we attended a hula show (very similar to Kauai) and toured the Iwaki City Aquarium. Then on Saturday morning, Iwaki city received some ice and snow and unfortunately the decision was taken to cancel the marathon! Although disappointed, the decision was correct given the conditions. However, it did not put a damper on the day as we were able to go tomato picking at a greenhouse and then visit the Kanazawa Shoko Art Museum where we not only learned to write our name in Japanese, but also got to try on kimonos and have authentic green tea. From there, it was onto the welcoming party where we were honored and brought on stage. We said our goodbyes and it was onto Tokyo by ourselves for 3 days of sightseeing. Although it was disappointing to not run the marathon, we had a fantastic time and would highly recommend checking out Iwaki City on a trip to Japan!