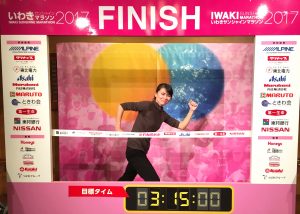 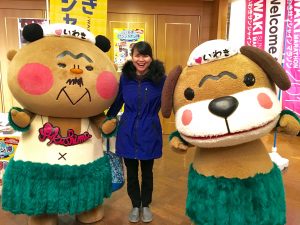 In my marathon life thus far, participating in the Iwaki Sunshine Marathon was a very special experience. I am originally from Japan, and was born and raised there. I started running marathons about five years ago and won first place female in the 2016 Kauai Marathon, which provided me with the opportunity to run in the Iwaki Sunshine Marathon on February 12th. Being able to participate in a race in my home country as an athlete from Hawaii was very special for me. Unlike Hawaii races, it was very cold! However, the over two thousand volunteers that were present did not say a single word about it being cold. Instead, they said, “Thank you for coming to Iwaki!” Their words greatly warmed my heart and made it a very happy race for me. While I was running, there were many foods to eat. There were strawberries, tomatoes, omanjuu, and hot soup! Usually, I never eat when I run, but it was a rare chance so I ate a strawberry and tomato. Of course, I did not drink the soup. I spent my time with Australian citizens. That was also a nice time of cultural exchange and was a very fun time for me. There were many sights to see in Iwaki City besides the race. The Hula Hawaiian Center, a temple considered a national treasure; a tomato farm; and a huge hot spring. The view from the hot spring was also very beautiful, so beautiful that I could not even imagine that a tsunami had hit it. Today, from the memories of Iwaki Sunshine Marathon and the time I spent there, the first thing that comes to mind is the kindness of everyone that I met. I will never forget the staff that coordinated with me from the time I landed in the airport to the time I left Iwaki City. From the bottom of my heart, I thank The Kauai Marathon for giving me this wonderful experience!